Two of the excellent people I met at Albert Deschesne’s memorial were “Fritters” Tays and Martin Tays. Martin is an aspiring author with a new book coming out August 19th, and everything I’ve seen so far is very impressive. A fun, humorous science fiction romp, and I think folks are really going to enjoy helping help Martin kick is writing career into high gear.

To find out more, listen in on his interview on Krypton Radio’s Event Horizon this Saturday and Sunday at 4pm (Pacific). The interview will be available later as a podcast.

Seriously, I’ve had some fantastic conversations with this guy, and I think he’s going to impress you all! 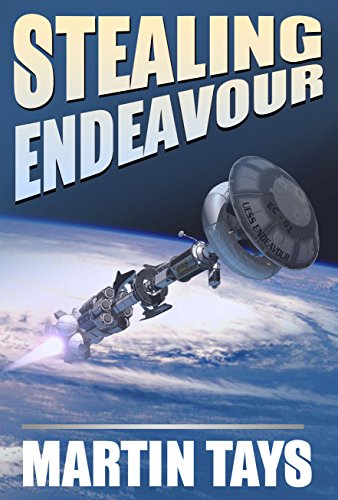 It’s been almost 500 years since humanity first ventured into space, hopeful and eager to explore, to discover, to find alien civilizations and friends.

There was just one problem.

After exploring 22 star systems, we had found no other life. Not no other intelligent life, but no other life at all. Period. Eventually exploration just… stopped, because humans had more than enough room and not near enough hope.

And then one day there was a signal, one no one chose to believe was real. No one except one hopeful, sarcastic and professionally drunken 487 year old ex-spacer. He, his 42 year old girlfriend, and a group of friends too young to have given up on that hope, set out to steal a mothballed spaceship and go find the source.

And the universe, for humans, will change forever.