My buddy Eloy Lasanta is bringing a bunch of Ninja Crusade 2nd Edition stuff into the world, anchored with a book that’s all about playing “the other side.”

Expand the world of the Ninja Crusade, delve into the Empire’s Reign, learn from each clan, and explore other dimensions and eras.

Empire’s Reign is a sourcebook for The Ninja Crusade 2nd Edition, Third Eye Games’ awesome ninja RPG where players take the role of ninja from once-rival clans fighting against the Empire. It has over-the-top ninja action, inspired by anime, like Naruto or Ninja Scroll, and martial arts movies, like Journey to the West or Sorcerer and the White Snake, and has gone on to receive multiple 5-Star reviews from RPG critics. Its mechanics, called the Chakra System, utilize d10 dice pools and flexible mechanics to allow for deep ninja stories.

The Ninja Crusade 2nd Edition corebook goes deep into ninja culture and how they work, but views the Empire and its Emperor through the lens of an enemy. There are two sides to every story, however. The Empire’s Reign sourcebook will give players a look at the Empire from the point of view of the Emperor, the soldiers who fight against the ninja because they believe in the cause and the average citizens who suffer in the wake of this war. It will include:

The final product will be between 100-110 pages at 8.5×11, and softcover, as all the sourcebooks for Ninja Crusade 2nd Edition have been so far. The art will continue to be at the high-quality pieces supplied by Gunship Revolution, who has already done an amazing cover for the book, reflecting the motif of it being the opposite of the corebook. In it, you’ll see the Empire Soldiers surrounded by ninja and holding their own. Great piece!

This Kickstarter involves getting enough funding to cover two things:

Beyond the initial goal, we have a ton of ideas for awesome material to add to The Ninja Crusade 2nd Edition gameline. The ultimate goal would be fully fund the entire gameline from beginning to end. This would include new Clan Books (like The Firebrands and Truth and Lies), new Nation Books (like Land of Seed and Blossom) and other books that don’t fall so easily into a category, like books on other dimensions or books to play in different eras.

Each sourcebook will be unlocked for every $10k we reach over the initial goal! And we have over a dozen book concepts to unlock, which gives us a lot of room for growth. As we unlock new goals, we’ll be having votes for some them (i.e. Which Nation Book should we do next?) and adding new tiers that give access to more print books. 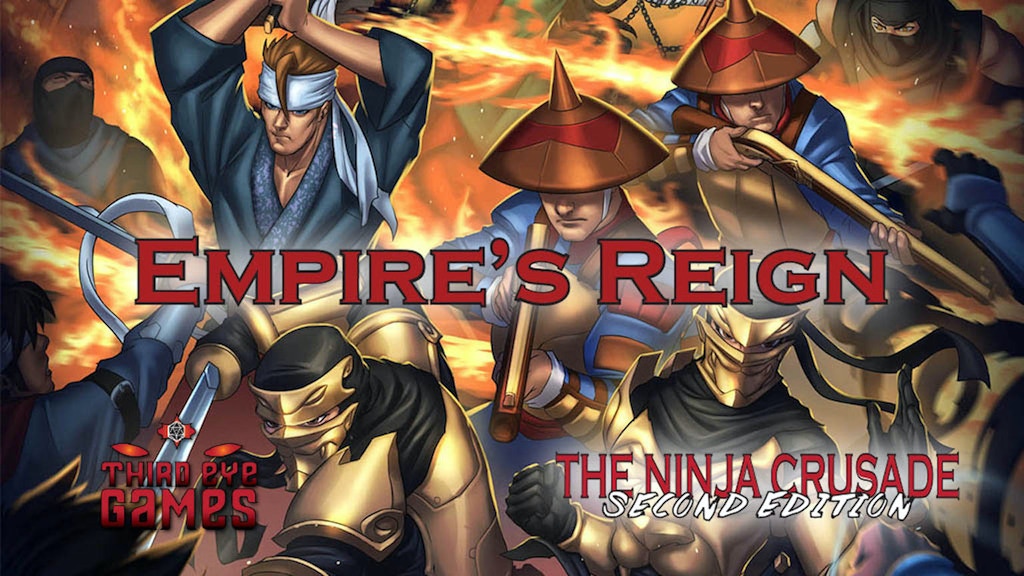