Light of the Universe, at long, long last I can replace one of the most important and beloved books I ever had in my gaming collection!

Folks, I cannot say enough about how amazing this book – written and designed by the amazing Richard Baker – is, or how important it was to my early career as a game designer and a world builder. I am not even a little bit hesitant to declare that my own Shaintar setting would be nowhere near as complete and detailed and effective without the vital tools and information I got from this book.

In short, the World Builder’s Guidebook was, by far, the single most important and beloved D&D book I ever owned. If you don’t add this to your digital library, there will always be a terrible hole where it’s missing. Game Masters and would-be world designers especially take heed!

Admit it. . . you’ve always wanted to design your own fantasy world. But the job was just too big and complicated, so you either quit in frustration or didn’t start at all.

Get out your pencils and markers, because it’s time to make that dream come true! From the first steps of picking a campaign book to the final details of crafting a kingdom or city, World Builder’s Guidebook leads you stage by stage through the process of creating your own, unique campaign world. Build a world modeled after your favorite movies or books, detail a portion of an existing world, or create your own fantasy world from scratch!

Some of the features you’ll find in the World Builder’s Guidebook include:

You’re the master architect of an entire world. What are you going to build?

“World Builder’s Guidebook” (1996), by Richard Baker, is a GM’s book on creating fantasy worlds. It was published in October 1996.

Origins (I): The Generic Books. The AD&D 2e (1989-2000) era was all about TSR’s many settings. However, TSR also published the occasional setting-generic book; by the mid ’90s they were marking this line with a black-bordered cover.

In 1994, a new line of generic books appeared intended to help GMs fill out their worlds. “City Sites” (1994) and its successors featured fully detailed location for use in any world. “World Builder’s Guidebook” took the next step by allowing GMs to actually create whole worlds.

Origins (II): Building Worlds. TSR encouraged building worlds from its earliest days. In fact, they didn’t produce their own setting until the release of The World of Greyhawk Fantasy World Setting (1980) because they figured people would want to create their own. Meanwhile, TSR was publishing books like the “Dungeon Geomorphs” (1976-1977, 1981) and the “Monster and Treasure Assortments” (1977-1978, 1980) to encourage the creativity of their players.

Exploring a New Setting. “World Builder’s Guidebook” doesn’t explore any existing D&D world; it instead gives GMs the opportunity to create something new. And that might be something very new: the options it offers allow for the creation of worlds quite unlike the official D&D worlds of the ’90s.

To start with, much like those Traveller supplements, “World Builder’s Guidebook” begins with a polyhedral world map, giving GMs the ability to lay out an entire globe. This was almost unknown for D&D’s fantasy worlds, with the exception of Basic D&D’s Known World. The “World Builder’s Guidebook” also includes some very nuts & bolts game systems for determining populations, geographies, and even climates. This was more simulationistic than most of the D&D worlds — though The World of Greyhawk Fantasy Game Setting (1983) offered a rare weather system that was comparable.

However, one final element of the “World Builder’s Guidebook” was more in tune with D&D’s worlds of the ’90s. The “Guidebook” suggests starting creation with unusual setting ideas and also encourages twisting standard elements like the traditional D&D races. Here, one can see the influence of settings like Dark Sun (1991), one of the most twisted and unique settings during the generally innovative setting design of the ’90s.

Future History. The “Dungeon Builder’s Guidebook” (1998) was an explicit sequel to this book.

About the Creators. Baker had been writing for TSR since 1992, focusing on the Dark Sun and Birthright lines. This was one of his last books for D&D until the ’00s, because he was about to dive into the Alternity (1997, 1998) line. 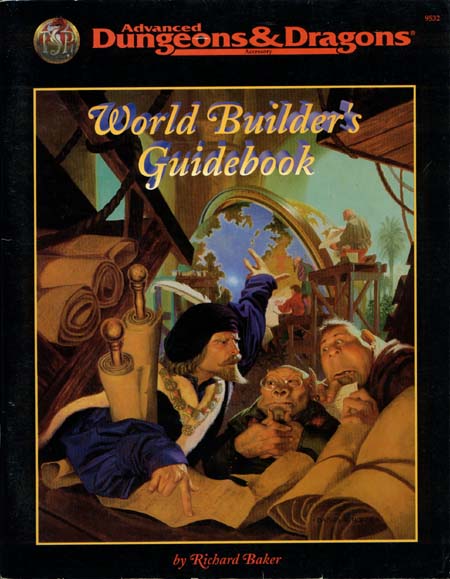